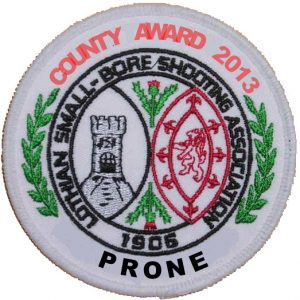 County Awards were re-introduced in 2010 as recognition for those who had shot in county teams over a period.  On the left is an example of the badges presented around that time. The relevant team name is given at the bottom. Unfortunately, for one reason or another, these badges have not actually been presented in recent years (since about 2016, I think).

Previously, the award was given to those who had shot in the county league and also in what was called the Four Counties match. This was a shoulder-to-shoulder match held at Perth for teams of 10 representing the counties of Lothian, Fife, Perthshire & Angus. It was held in Spring and there were both 25yd indoor and 50yd & 100yd outdoor matches. The county with the best combined aggregate took the Dave Mitchell trophy.

Lothian teams, organised by the then Edinburgh & Midlothian Smallbore Rifle Association, used to win this quite regularly. Well, strictly speaking it was a ‘Lothians‘ team as ‘Lothian’ didn’t exist as an entity until 1977 and the team came from West, Mid and East Lothian plus Edinburgh. The conditions were changed occasionally to try to stop  us winning it, including reducing the team size and adding a rapid-fire shoot, but we still kept on winning. I think it ceased in the 1970s sometime. I remember Dave Mitchell just taking his trophy home and saying he wouldn’t allow it to be used for this again, and that was pretty-much that. He was a cantankerous old so-and-so from St Andrews anyway, well known for his idiosyncrasies. I think most of the counties were struggling to raise teams for the match anyway so it was probably about time for it to go.

So, the demise of the Four Counties match, which turned into the Five Counties match at some point after Stirlingshire (I think) muscled in, meant that one component of the County Award scheme was no more but I can’t remember exactly when they stopped being awarded. It might have been when the Counties matches ceased or when LBTSA was formed in 1977 as the badge which was the award was no longer appropriate.  This is it:

Just for interest here (below left) is the old badge with the Association’s ‘logo’.  The wording round the edge was ‘Edinburgh & Midlothian Smallbore Rifle Association’ (or perhaps a contraction of that) but the rest was the same. Many local shooters had this badge sewn onto the back of their cloth ‘Tenex’ shooting jackets which was the popular make at the time.

[Corrected text:]  It was used as the basis for the simplified design of the later LBTSA one (below right) which was created in 1997 to be put onto Association-branded clothing. We produced sweatshirts, polo-shirts and T-shirts with it on them. No longer available, so they’re collectors’ items now! It was chosen as the logo for our inaugural website launched in 2003 as the ‘yellow’ one didn’t look too good there, and nor on letterheads (and it had basically been forgotten about by then anyway – nobody was sewing badges onto their leather shooting jackets).

The only actual badges with the later design that were produced were the Centenary badge in 2006 and the County Award badge above.

E&OE. If anyone has any corrections (or even relevant additions) to make to this or has an actual E&MSRA badge they are prepared to lend to reproduce here, please contact the Site Administrator.

Back to County Awards page
Back to top

The Final of the Individual Championship will be held on 31st March. Take the ‘Championships’ link in the ‘Competitions’ drop-down above to see the winners of the subsidiary Championships.